It's been a long time since the last blog entry, I didn't realise just how dedicated you need to be in order to keep the level of entries up.  Still, thought I'd try and reboot it in the grand tradition of Hollywood blockbusters and this is my first attempt.  I've decided to try and put up regular pieces that reflect my musical taste so there'll be a mix of things appearing here but I'm also looking to include pieces on not-so-well-known bands that I actually think are quite good and I really couldn't have asked for a better band as a starting point.

I've known Kirlian Blue in a virtual sense for a number of years now and happen to love the musical output of his partnership with Rocky Goode, I'm amazed that they haven't received more mainstream attention so far, particularly last year which turned out to be the year of the synth.

Anyway, ladies and gentlemen, I give you... 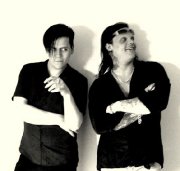 Back in 2004 two very different but equally bizarre individuals set off to an Industrial Club in South London. Sadly the night was cancelled but all was not wasted as Rocky Goode and Kirlian Blue bumped into each other by chance and got talking. Kirlian, without any hesitation, asked Rocky if he would be willing to help start a band as a vocalist. After several discussions and months drifting by, The Thought Criminals were born - influenced by alternative dance, dark electronic music from the early 80's and New Wave. This mesh of influences can be heard on early demos such as Revenge where an Ultravox/John Foxx sound can be detected or on Date Rape Lovers where a Soft Cell/Gary Numan fusion can clearly be heard.

The first gig performed by this fledging electro band was in a backstreet pub near New Cross in South London. For The Thought Criminals this was make or break, and of course in best musical tradition, Rocky and Kirlian hadn't even rehearsed. The first four songs brought no response from the crowd and things were beginning to look bleak. Then something fused, everyone was suddenly up and dancing and there was a sound in the crowd. As an event, this was more than a little bizarre as very few, if any, two-piece electronic outfits in South London were attempting to play to Metal/Rock crowds, but the attitude of Rocky and Kirlian prevailed.

The Thought Criminals, with their demos of Electricity, Cyberslut (a huge live favourite), Date Rape Lovers and Revenge, started to appear on club compilations and compilation albums in the UK, Japan and North America. There was clear appeal for The Thought Criminals sound, with its mix of rather tongue in cheek sleazy lyrics and alternative dance beats and breaks fused with dark industrial and early 80's electronic melodies that were ground up and bastardised into something so hook-laden that listeners just could not get the songs out of their heads.

2006 saw the recording of The Thought Criminals debut album and the band were on the prowl for a label to unleash their mainfesto onto an unsuspecting public. Sadly, despite massive effort on the bands part, they met a muted response, got fed up with the whole thing and instead self-released a digital single called I Want To Be A Celebrity. This move brought the band enough interest for The Thought Criminals to be offered a deal by some dubious record label owner. The band was already playing the likes of the Brixton Mass and headlining legendary venues such as The 333 Club, The Hope and Anchor and The Dublin Castle as well as several University Student Unions; this without any manager, press or radio play in the UK.

With this exposure, the fan base grew quite rapidly although unfortunately the deal with said dubious record label turned sour just after the band had built up a following big enough to headline the Underworld in Camden and self promote the event. Around this time, The Thought Criminals released Suicide Bomber as their second Digital Single, a highly topical and catchy track if more than a little tongue in cheek lyrically, which to this day is one of the most notorious under-the-radar songs released.

By 2008 The Thought Criminals had put themselves about a bit, playing in Ireland and Sweden amongst other places. During this year Rocky and Kirlian decided to head back to their more electronic roots and said goodbye to their live guitarists at the Brixton Mass. Then things started to look up a little more as WTII Records (formally known as WAX TRAX!) asked if the band would be willing to release Die Young: Stay Pretty through them and by November 2008 it was being distributed across America and getting positive reviews whilst also picking up a lot of airplay.

By this time Rocky and Kirlian decided to enlist another keyboardist as they didn't want to look like a bastardised version Pet Shop Boys, like they did when they started. And so new member Enigma joined The Thought Criminals in 2009 with the band headlining a sell out gig at London's Fetish/Industrial Club with a capacity of 1300.

The Thought Criminals are currently working on their second album entitled You're A Moral Liability.

Read my review of their debut album here: http://www.myreviewer.com/default/a106219/Die_Young_Stay_Pretty_Review